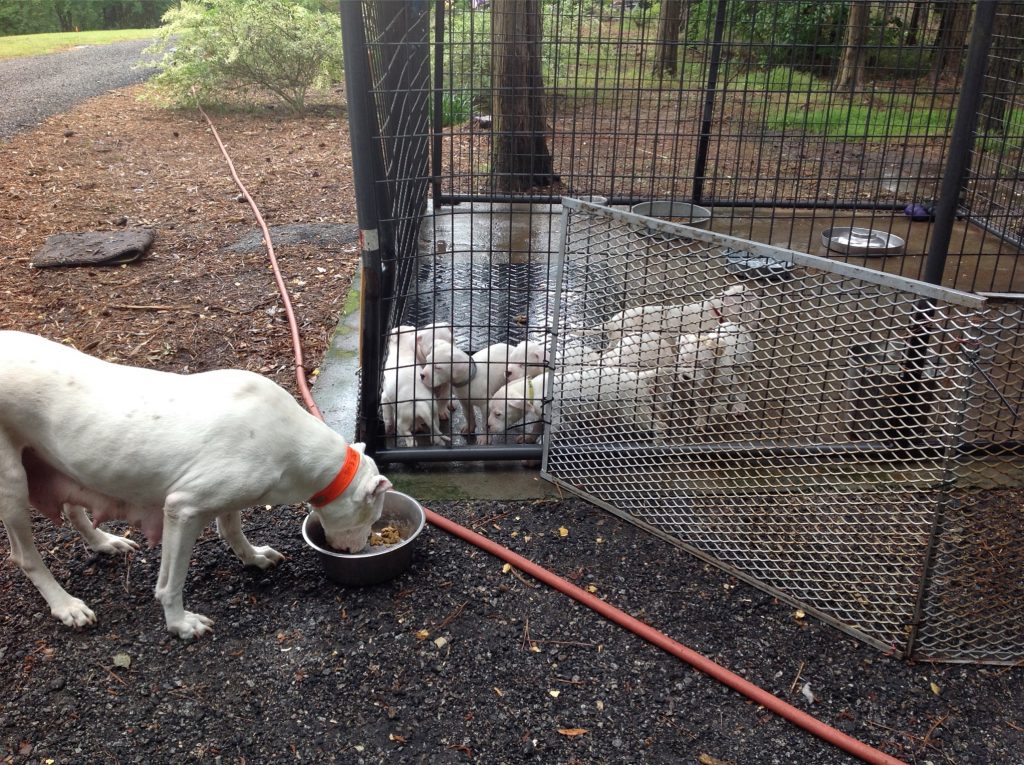 This is Cocha our Premier Bitch and her last litter. Schaffer Ridge Dogo Kennel prides its self with 100% purebred Dogo Argentino’s directly imported from La Cocha, Argentina. Our puppies are cared for and completely socialized in their pack as they are in Cordoba. Raised and worked within the frameworks of the Cordoba, Estancia provides. We hold the highest standard of selective breeding. Our goal is to produce the very best of the best in America. Certainly, in South Carolina. We hunt our dogs regularly and they stand guard on our 400 acres of property. They are not sold for breeding or fighting. When you have the best breed bloodline, we feel it’s imperative not to change something that is not broken.

Schaffer Ridge is a Registered Member of the AKC American Kennel Club.  We are dedicated to keeping the breed pure, Breeding only the “BEST” of the original old school standard bloodline.

Testing our breeding stock in the field using only proven breeding stock, Abiding by the strictest rules and standards of Dr. Maratinez.
All owners must go through a rigorous interview process to ensure the right dog goes to the right family.

We are as rare as our dogs. We are very selective about who gets our dogs. We have a waiting list of people some who have been waiting for as long as a year or more. Why do these people wait for our dogs? Read our testimonials. We do not breed often and do not always have puppies available. As a matter of fact, we have never had any puppies not spoken for prior to their birth.

When you are searching for reputable honorable breeders. Please do your homework. You will be living with your dog for the next 10-14 years if you are lucky, your dog will be happy, healthy, well balanced. A great companion, a Nobel and loyal friend. Our dogs will do the job. We breed only the best proven and tested dogs.Not the first bitch to come into heat. We are not a puppy mill. Or, truly maybe we should not call ourselves breeders. We on occasion supply a select number of individuals, our owners are as rare as our dogs. A unique combination of quality dogs connecting with the same in owners.

Dogo’s are not for everyone. We breed for intelligence, drive, courage, loyalty, and nobility! Our mission is to produce the best of the best hunting/guardian type dogo’s in America.

An important letter explaining our process.

Some time ago Jeff asked me to write up a column on my experience with his Kennel.  I told him I’d be glad to and figured I would type up a few dozen words and that would be that.   What actually happened… was I ended up writing a novella.   Thankfully… I was able to edit it down.

When I first set out to write, I realized that I was making Jeff’s behavior seem a little crazy.  And at the time I probably agreed with that assessment.  But now its over a year later… and I’ve spent that time with my big goofy dogo… and now I have a completely different perspective.  Jeff wasn’t being crazy.  He was being responsible.

Ever wonder what it would look like if you put Rocky’s heart in Ivan Drago’s body?  That’s a Dogo.

My own experience began with months of research to find what I considered to be a real dogo.  Having much experience with American breeders and their normal problems I was very skeptical and I dug hard into the background of all of the breeders I found.  It didn’t take long to rule out most of the breeders.  They had dogs with spots on them in their pictures, which is simply not acceptable in Dr. Martinez’s original breed standard.  In others, you could see the bite was wrong.  Other times it would look good on the internet but a quick 15-minute conversation convinced me I was not dealing with someone that produced what I was looking for.

Then on pure chance, I came across Jeff Schaffer.  I was not hopeful but I shot him an email and told him a little bit about my background with dogs and told him what I was looking for.  We exchanged a few emails and then one morning I called him and applied my usual method.  We were basically interviewing each other.  Jeff is a skeptical man, and I am as well.  Never the less we hit it off pretty well in spite of what would have been an adversarial call when you think about it.  The more I talked to him and learned his story the more I was believing he was the real thing.  I later learned he is far more than that.

Jeff told me he had a couple of pups and he had a lot of questions for me about what I was looking for in a pup.  It was very important to him that he pick the right pup for me.  That impressed me.  It impressed me more later.   In addition to these questions, he asked me to fill out his application… which I did.  As I recall it asked for several personal references.  I filled these out as best I could.

Things got weird about 3 days later when the first of my references, some friends from church, called me to ask about the crazy dog breeder that grilled them.  Not only grilling them but also asking for additional references from them.

He had found out from them about the church that I attend and he called my minister… who also called me to let me know.   This went on for a few days.  I would get random calls from folks that always started with the phrase “Hey are y’all getting a dog?”

Occasionally I would get emails from Jeff letting me know about his progress.  It was entertaining, to be honest.  He was attacking these references like a homicide detective with a hot lead.  But in his emails, he sounded frustrated because he could not get anyone to say anything bad about me or my wife.  I tried to explain that we lived in a town that may as well be Mayberry from the Andy Griffith Show.  No way someone was going to say something bad about us over the phone to a stranger.  My preacher told him the same thing.

To a lesser man this would be time to quit but for Jeff, it was a red flag of sorts.  He didn’t like it when all he heard was good things.  So he was going to keep trying until someone had something bad to say.  This went on a while longer… and we kept getting those calls.  “hey y’all getting a dog?”

Eventually, my own red flags started going up.  With this kind of dog, this process could become a liability issue.  Maybe it already had.  Half the town now knew that we were buying a Dogo Argentino.  Most of them didn’t know what that was but a breeder acting like this had to mean a dangerous dog didn’t it?  One night my wife and I were discussing it and were just about to decide to call it all off.  The next day I got an email from Jeff grudgingly admitting that we must be ok because try as he might he couldn’t’ get anyone to say anything bad about us.    I couldn’t tell if he was happy or irritated.

Looking back on all of that… you would think that I would have a negative impression of Jeff.   I don’t.  Jeff picked the perfect dogo pup for my family.  And was he too careful in vetting us? Well, remember that question I asked a few paragraphs ago? How much research would you do before you sold someone a mountain lion?

Dogos are coveted all over the world by Dog Fighters.  And Dog Fighting is a big deal in the rural south. I’m from the Rural South.  Looking back Jeff had every reason to worry that I couldn’t handle his dog… or worse than I was buying the dog to use in illegal dog fights.

I wrote all of this because I wanted to let you know that the process Jeff tells you about is real.  It’s intense.  And… yes… it is completely justified. Don’t think so? Just remember this… if the FBI was as diligent as Jeff Schaffer then Dylan Roof never would’ve been able to buy that gun.

Ziva is my Schaffer Ridge Dogo.   She’s gentle and sweet. She lives in a house with 5 children, the world’s dumbest Labrador, and a chihuahua of all things.   She hasn’t ever hurt any of them.  Not even the rat,  I mean the chihuahua, which antagonizes her without fear or mercy.   She has a huge heart which runs on pure affection.  Dogo’s crave affection and love the way other dogs crave food.  The affection tells them they are in the pack.  It tells them they belong.  Having a place in the pack is everything to a Dogo.  A dogo will kill and die without a second thought for the pack.

But every pack has a leader.  Every pack has an alpha.   You have to be that alpha.  The Dogo can’t be the alpha.  The Dogo has to know that you and every other human in the pack are on top in the pecking order.   You must be capable of establishing this and maintaining it.   If you can’t… then getting a Dogo is a very bad idea for you.   You better stick to labs and Golden Retrievers.

I have given Jeff all of my contact info, and I have told him that I am available if anyone would like to discuss my experience.

If you are experienced with large dominant dogs, and you want a real Dogo Argentino… just like Dr. Martinez used to breed… well, then you came to the right place.

Important comments made by our customers.

“My dog was house-trained almost immediately. He has never had an accident in the house. He was asking to be let out within a week.”

Rate dealing with our kennel the same way.

Was there anything we could have done to make the experience easier or better for you and your dog?

What would you suggest we tell new people that we may have not mentioned?

“We fully understand and appreciate why you do such a thorough job vetting and placing your animals. It is a lot of work but really necessary considering the dog. Even with all the information given, you don’t know how much dog you’re getting until you experience it for yourself.”

About Dogos
Scroll to top